Venice is magic, Venice is unique. Venice is moored in the lagoon with its 118 small islands connected by 417 bridges, Venice is sparkling and majestic, but also silent and hidden. Venice is more fragile then its glasses and intertwined more than its laces.

There is a Venice of its postcards, of the most famous and crowded monuments, and a much let known and therefore neglected with its thousands of secret corners which are neglected but which are a not less fascinating part of it.

Not all guides report them, so tourists, generally go along the most beaten roads and are satisfied with what is best known and most easily reachable.

They don’t realize what they lose. In fact only if you get to know the silent and often secluded corners, you can understand (grasp) the true greatness of the city, sometimes made of very narrow streets (Calle), where only two people at a time can pass,

of popular areas with disorderly dark small shops, of hidden silent neglected campielli (small squares) where you can hear the rumble of your steps.

Here we give you some hints, taking you a very central part of the city which is, however, different to find: Campiello del Remer (enter onGoogle Maps https://goo.gl/maps/SoDQmukoUY7p4PHc6 ) so called because in the past there were a lot of people who made oars (in Italian remi). https://goo.gl/maps/SoDQmukoUY7p4PHc6), così chiamato perché in zona vi erano molti costruttori di remi.

If you want to reach the Campiello near Rialto, you have to be on the side of Campo San Bartolomeo and go towards Campo Santi Apostoli.

After crossing the first bridge, you have to stop just before the next one (ponte dei zogatoli): on your left you will see a narrow and uninviting “calletta”, go along it and you will reach a “campiello” overlooking Canal Grande, with a special view of Rialto Bridge.

In the center there is a well and a beautiful outer staircase leading to a gothic “loggia” belonging to a 14 th century palace. There you can find a small, but reknown restaurant.

After crossing the bridge, turn right along a narrow “fondamenta”. Again cross another Istrian stone bridge “Ponte Pignoli” and urn right. You will be in front of Sotoportego Tramontin or Basadonna (enter on Google Maps …: it is probably the lowest of the city, in fact you will have to lower yourself to cross it. At the end of it you will get to an airy campiello (little square) surrounded by buildings.

The narrow sotoportego (portico), already very tiny, is half occupied by a raised pavement because when the tide is high it goes underwater.

Would you have arrived there by yourself? You will find these and many more “secret” addresses in our guides at your disposal. 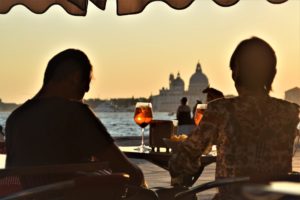 What you can eat and drink in Venice 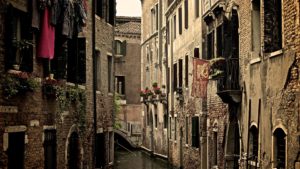